Which Actor/Director Has The Balls To Make An ISIS Movie? – ManlyMovie

Home / Editorial / Which Actor/Director Has The Balls To Make An ISIS Movie?

Which Actor/Director Has The Balls To Make An ISIS Movie?

The news last month that Rambo was going to take on ISIS in Last Blood, was such a viral monster that it caused Sylvester Stallone’s reps to come out and deny it. It’s still the single most read post in the history of ManlyMovie, it garnered over 100,000 views in the first 24 hours.  I don’t really know what it’s at now.  Pity it was fake though.  It did get me thinking though that someone really needs to make a movie about these asshats. They’re pretty much the epitome of evil and when Al-Qaeda bails on you for being too scummy, you know you really must be a piece of shit.  The controversy surrounding these savages appears turn people off making a movie about them.

Think about it though.  If done correctly, what a movie it would make.  Think a Cannon Film Group approach.  There’s money to be made in being the first to the well on this one.  There’s also the potential to relaunch a stagnant career.  Who has the balls to do it?  Isn’t it time someone loaded up an M-60 and headed to ‘The Caliphate’?

I am going to appeal to Nu Image to be the first out of the gate.  Avi Lerner is sort of a… blasé, film producer.  He has scorned fans in recent times with his approach to The Expendables series.  But I think the man may just be reckless enough to do this type of thing.  I mean obviously you could get someone F-rate production house to attempt this sort of thing.  But we don’t want some terrible VOD movie, not just a typical VOD movie but the absolute worst of the worst.  We’d want someone with at least a bit of production muscle.  If Menahem Golan was still around he’d not only have the balls to make of these movies, he’d already be working on the sequel!

Needless to say, we need a director with balls.  One who is not afraid of controversy and would probably even embrace the idea.  My firs thought would be John Milius, although he is leading a quieter life these days and if he does anything at all, he’ll probably be doing his Genghis Khan epic.  My second thought though, and this one would be much more realistic, would be Uwe Boll.  Now this guy has outright balls of steel (check out our exclusive interview with him here) and really could not give a fuck about contemporary trends or so-called undesirable backlash.  Picture the scene, Uwe Boll films a finale where our hero massacres ISIS savages literally by the truckload.  He could make it cerebral and and pull no punches. 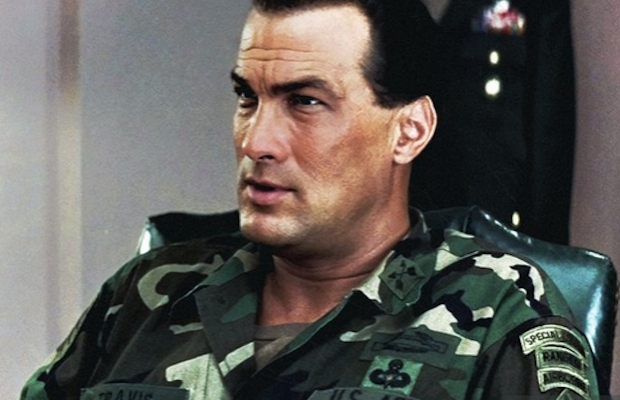 For such a movie, we’d need a hero.  And probably one who’d have the balls to take on the role.  Sylvester Stallone evidently will not go there – I can’t say I blame the man.  He doesn’t really need to.  That’s why I’m thinking, perhaps, seeking a guy who once was great, but has fallen on harder times.  First thought?  Steven Seagal.  Steven Seagal versus ISIS.  Now come the fuck on!  Even if it got a limited theatrical run, I could literally see people packing out theatres for this.  It could be his ticket back to the mainstream, it could serve as a ‘kickstarter’ for Under Siege 3.  Hell, imagine Under Siege 3 itself was the movie!  Casey Ryback is stuck, under siege if you will, in an ISIS stronghold, and the doorsways are stacked high with the bodies of dead Takfiri pissants who want a piece of the Master!

Replace Burma with ‘The Caliphate’

Which leads us to the concept itself.  We’re probably talking an action movie here, or action/thriller.  I think the basic theme should be search and rescue, although given that these scumbags still have hostage, perhaps that would be too insensitive.  If that doesn’t work, simply have our hero wage a one man war against the beasts.  Who, why, does it really matter?  What really matters is the body count and the methods of pissant disposal.  Thank Rambo IV and you’re seeing the picture.  Come to think of it, there have been a few ex-Marines fighting with Kurdish forces against ISIS in the north of Syria.  Maybe that’s your answer right there.

Here’s another idea.  A more serious one.  Make a movie about Assad’s forces, the unsung heroes in trying to deal with these pieces of human shit for years now.  Nobody in the world has a bigger ISIS bodycount than they.  The Syrian Army is packed with Christians who have been tirelessly fighting ISIS for what soon could be the length of WW2.

And now the best part.  When I read that ‘report’ on Rambo V, I thought to myself, if this is true, it’s going to have the best publicity for a movie, ever.  Because the sheer controversy over an ISIS movie will turn a $20 million marketing budget into a $200 million marketing budget.  But what would really kick things off would be the first death threat.  Be it towards the actor, the director or everyone involved.  I mean in theory, if Steven Seagal were to make such a movie, ISIS would probably threaten to behead him.  And you know that the Sensei would not back down one iota.  For example Steven Seagal once boasted that if he saw a civilian being attacked with a knife on the street, he’d literally kill the man holding the weapon.  You know with Mr. Seagal being a former member of the uh, CIA, it would certainly make for an interesting setup.  It would pay for itself!