Actor and The Specialist star James Woods’ Twitter account was targeted for censorship Twitter at the request of the butthurt Democratic National Committee, according to findings by the company’s new CEO Elon Musk. 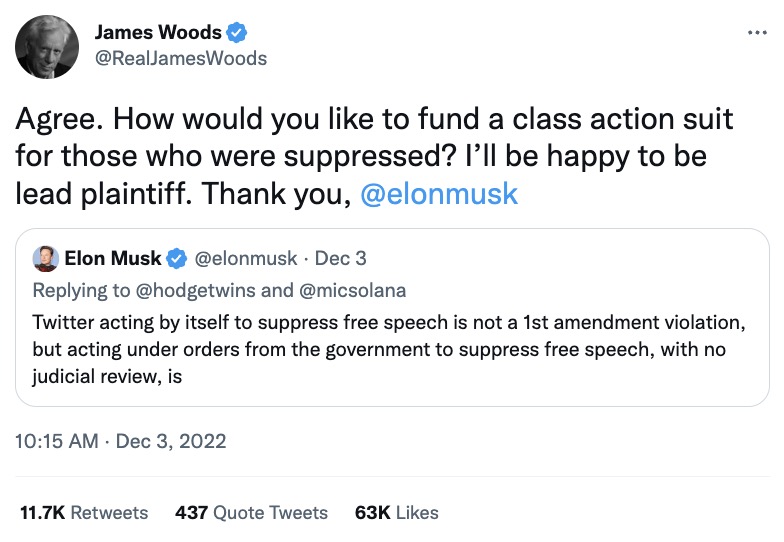 Now, as can be seen above, Woods is going after them and is talking about a class action lawsuit.  Woods also appeared on the Tucker Carlson show and exposed the entertainment commissars’ methods of political filtering.

You know casting directors in my business, literally go online and they check every actor who comes in for a part to see who they’re following.  If an actor or an actress is following me, they will blacklist them.

So if you have a favorite actor and they have not been appearing in roles or you’re seeing less and less of them, they could well have been blacklisted by ‘casting agents’ (political officers) for espousing centrist beliefs, or something like that, as opposed to batshit neo-marxist views.

Anyone remember Dirk Benedict?  He played Faceman in The A-Team.  Benedict never appeared in anything mainstream ever again.  Only in a few years back did they let him near something, which happened to be the Blu-Ray commentary for The A-Team, where Benedict ranted that he’d been blacklisted from Hollywood for supporting Ronald Reagan.